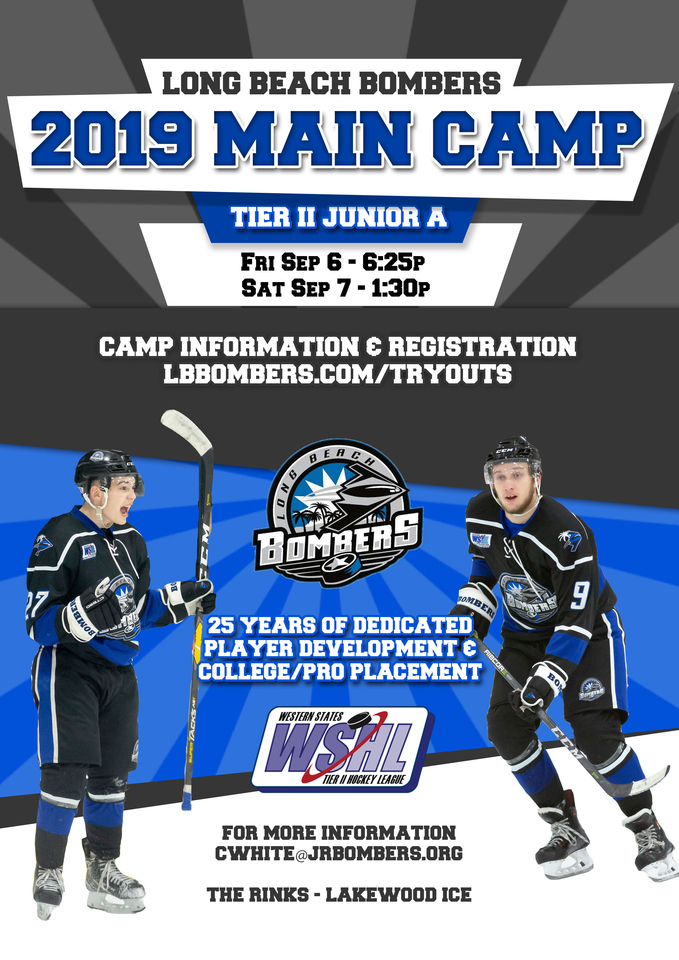 The Long Beach Bombers Main Camp will cost $100 per player

The Western States Hockey League is entering its 26th season of developing and advancing young talent. Over the previous 8 seasons, under Head Coach Chris White, the team has moved 73 players on to collegiate or professional hockey.  On March 30, 2019, the Bombers won their 4th-consecutive Western Division Championship.  The franchise has recorded the most wins out of any current WSHL team over the past three seasons, including three trips to the Thorne Cup Finals.

The Bombers, who are one of the founding teams in the WSHL, have participated in every season since the 1994-1995 inaugural season.  The Bombers, have many alumni who have participated in both the USHL, NAHL, Division-I and Division-III NCAA college hockey, ACHA college hockey, and professional leagues.  The current Long Beach roster features players from 8 different countries.  Many of the international players who have played in Long Beach have experience at the highest level of their country's U20 hockey, and have represented their country on the National Team, and in some cases, even at the World Junior Championships.  The WSHL plays a 51-game regular season schedule, highlighted by the WSHL Las Vegas Showcase, in December, which is attended by more than 100 collegiate and professional scouts; this includes NCAA Div-l coaches.  The team has a private locker room, a team bus, broadcasts every game live in HD, and top-of-the-line equipment/apparel.

Executive Vice President: Gary Hendricks who has served the Bombers for 18 years.